Here are the Tier List for Nexon's New Game "Spiritwish"
There are 3 Tiers in Spiritwish and currently, the enchanted has more characters right now.
Tiers are separated in 3 tiers: Common, Enchanted and Rare.
Without further ado, here is the list of characters and tiers.

Popular posts from this blog 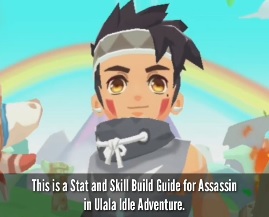 This is a Stat and Skill Build Guide for Assassin

Assassin is a Melee High DPS Class that can deal high damage, for single or multi-target enemies.

It can also interrupt the monster's skills, which is needed in a team when you face a strong enemy boss that has long-duration damaging skill.

The only downside for Assassin is, they are not a tank class. They can absorb more damage compared to other classes EXCEPT for Tank Class. So if the team relies only on an assassin to absorb the damage from enemies, it won't survive long enough to kill the monster boss.

Think of it as a melee version of Hunter but with a higher HP.

So let's proceed to the STAT Build for Assassin.

AGI increases your base attack or damage output, but with TECH, you can increase more damage output with Critical Damage.

However, you can go STA for survivabili…
Read more

F1 Manager Android/iOS Tip #1: Basic Gameplay, In races you control two drivers. Your drivers will get more points the higher up the leaderboard they finish. You can control each car’s speed and decide when they should pit stop.

However, the faster you go, the more fuel your car will consume and the quicker the tires will wear out. You cannot refuel during a pit stop - so make sure your fuel will last until the end of the race!

F1 Manager Android/iPhone/iPad Tip #2: How do I win?
Each car that finishes a race gets points. The higher your position on the leaderboard, the more points you will get at the end of the race. The aim is to get more points than your two rival cars.

This often means you don’t need to fight for first and second positions - you only need to score more points than your rival to win.

F1 Manager Mobile Tip #3: What is Qualifying?
A qualifying lap happens automatically before each race and will decide the starting positions for your cars and your rival’s cars.